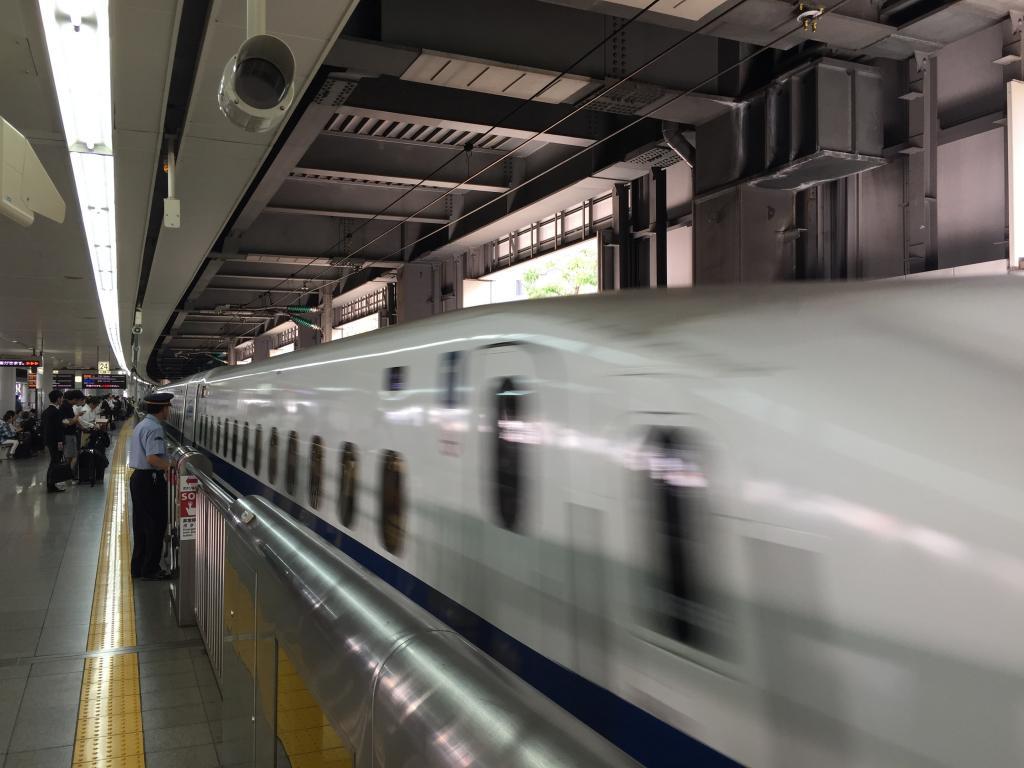 Japan travel – Efficiencies inside and outside the train station

I’ve been spending a lot of time traveling on the Shinkansen and other trains for gemba visits to Japanese organizations and with my family on the weekends.

Rail travel in Japan is impressive, but I’ve realized that there are many opportunities for improvement in efficiency for the overall “train travel” experience.

The number of people who travel by rail in this country is astounding.

Shinagawa station alone has roughly 700,000 passengers arrive or depart by train per day, and it is only the 6th busiest station operated by JR East.

Walking through the station can be a bit like playing the old computer game “Frogger” if you have to cross from one side to the next.

Efficiency inside the station – on the train

Trains in Japan are amazing! They are famous for their punctuality, speed, efficiency, cleanliness, and comfort (leg room!). The rail system – from local trains to the high-speed Shinkansen “bullet trains” –  is an incredible people-moving machine. I would rather take a train in Japan than fly any day!

The announcement that “this train will be making a brief stop at [insert name] station”, should be taken seriously. Each trains stops for less than 60 seconds, so be sure to be ready with your luggage to get quickly on or off the platform.

A benefit to train travel over air travel is that people can still be getting seated and organized after the train has departed from the station, so it’s easy to keep moving towards your destination.

The cleaning process for trains is impressive as well.

A team of men and women bow when a train arrives and within minutes they move through a highly choreographed process that includes cleaning the seats, removing trash, and rotating the seats around (by pushing a button or lever) so that the seats are oriented the correct way.

Check out this video that shows the “7 minute miracle” of the Shinkansen cleaning process to be wowed. I’d like to see the standard work for this process! (Note, they don’t stand to collect garbage at every stop – just the final destination. More on the issue of trash disposal – and lack of garbage bins – in a future post!).

Inefficiency outside the station

Given the ease, comfort and efficiencies on the train, one might think that this would extend to the entire train travel experience. However, some recent experiences have proved otherwise.

Arrival – bottlenecks getting in and out of the station

However, this time my taxi dropped me off at a different entrance than usual. Instead of stairs or a standard-width escalator, I encountered a single-passenger escalator. It was moving much slower than takt time (customer demand) required….

I was surprised that people were forced into a bottleneck to get into or out of the station at this part of the station, given the massive numbers of people who are moving in either direction. Can you imagine the flood of people walking off the platform (see photo of Shinagawa station in the “High Volume” heading section above) trying to exit or enter via a few single escalators? It’s doesn’t work well!

So I was stuck queuing for several minutes as the line of people rode up the escalator. I nearly missed my train, but thankfully I knew exactly how to get to the platform and where to go for my car number. I made it just in time – and I was grateful for the pleasant ride of the Shinkansen for the rest of my journey.

Departure via taxi – lots of waiting

I’ve also been frustrated by the challenge in getting a taxi once you actually depart from the station. I arrived by train into Shinagawa station after an excursion with my family and couldn’t believe how inefficient the taxi loading process was.

This happened ten times until our taxi drove up to get us! We probably waited as long in line as our actual taxi ride home was (15 minutes).

This is not my first experience with this inefficient taxi queueing process, but I continue to be dumbfounded why someone hasn’t made any improvements given the number of passengers wanting a ride and the number of taxis waiting to serve them.

I’ve since learned to skip the taxi queue by going out a specific exit and catching taxis on the street before they line up for the queue.

I’m surprised to say this, but there is something that Japan can learn from the U.S. in terms of transportation processes. Japan taxi driving services need to go to the Las Vegas airport (or many other places) and take a lesson in people-moving at the taxi stand! But I’d still rather take a Shinkansen that fly in the U.S. domestically any day!

What is your experience with efficient or inefficient public transportation in Japan, the U.S. or other countries? Which country or service delivers the best customer value? Cast your vote in the comments section below.