I have officially started my Japanese language lessons. I am in the process of learning the Katakana characters first then the Hiragana characters, as well as focusing building basic sentences and being able to count (things, numbers, money, time, etc). It’s exciting to be learning something completely new. I just need to find more time to practice and memorize.

Katakana are the phonetic symbols that are used to represent any words of a foreign origin. There are technically only 48 katakana characters, but in actuality, there about about twice as many symbols as there are combinations of two characters or the addition of hash marks or little bubbles to the upper right of the character make a different sound. This is my family’s names written in katakana: “John, Jones, Jack, Katie, Anderson”. The “Jo” sound requires a combination of three symbols. 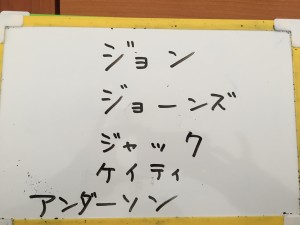 What is fun about katakana for beginners to the Japanese language is that 95% of the words spelled in katakana are of English origin. One just has to first sound out the symbols and then guess what English word was the original. For example the katakana for “elevator” is phonetically “e – ri – be – ta”. It’s been fun to walk around the city and try to figure out what the katakana words mean.

Hiragana are the phonetic symbols for words originally of Japanese origin (typically words that were in existence before the Edo period ended in the 1860s) for which there are no kanji. I will work on learning Hiragana next so that I can read as I develop my vocabulary skills.

Kanji are the symbols that originated from Chinese that represent a whole word or meaning. I intend to learn some of the important kanji – such as for food at restaurants and for numbers.

Romaji is the Roman alphabet that we use in the Western world. Romaji is relatively common in Tokyo, but less so outside of the city. It is also used as “eye-catchers” for advertising.