I have never experienced the gender divide in terms of roles as acutely as I have in the past three weeks. 95% of the women I have met who have children, both foreigners and Japanese natives, are stay-at-home moms (or “housewives” as they are called here). Granted, we have only been in Japan for three weeks, and most of my time so far has been spent getting my family settled. My sample size is limited right now and I likely am not meeting working mothers (either foreigners or Japanese) since most of my time out and about are during the typical workday hours.

For those of us foreigners, I find it interesting that nearly all of the families that we have met are here because of the husband’s job. Women either were not working prior to the move, or had to stop working because of the move. Japan does not support full-time working visas for spouses (unlike Australia or other countries I am familiar with), and language fluency can be a problem especially if you are looking to be hired locally (so I’ve been told). Those of us who are not the “working-spouse” are on dependent visas, which only permit employment up to 25 hours a week. I have met a select number of ex-pat women who have part-time jobs or who have their own consulting practices, as I do, but the vast majority are not working outside the home either by choice or because of the above challenges. I’ve met two American dads now who have come over for their spouse’s job and they are in a similar position in terms of visa and work. 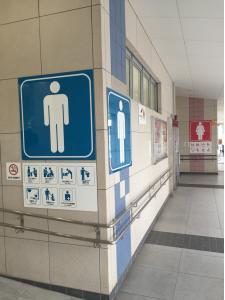 At least the public restrooms are for gender equality: both the men’s and women’s restrooms had stalls for baby changing and children’s toilets.

For the Japanese, the only full-time working women I have met yet are those who do not yet have children. I have been told by many Japanese and foreigners that working conditions in Japan are not that friendly to women who want to work after having children, nor is there the infrastructure (such childcare for children younger than preschool age) to support this. Given the hours workers are expected to keep, with socializing and working well into the night, it’s not very family friendly to women or men who want to actually see their children during the week. I wonder what impact the expectations placed upon full-time workers have on fathers and family life in general.

I look forward to meeting with and talking to more working women here about gender dynamics and their own experiences.

What are you interested in learning about gender dynamics in Japan. And, if you have lived in Japan, what has your experience been?