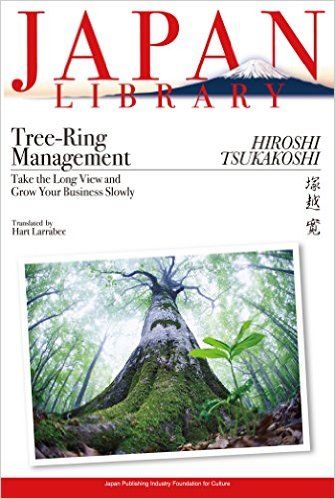 On a recent trans-Pacific flight, I read read a book written by a Japanese business leader named Hiroshi Tsukakoshi called “Tree Ring Management: Take the Long Term View and Grow Your Business Slowly”. His leadership and business philosophy is to take a long-term view to decision making, to grow his business and to develop his people year by year, hence “tree ring management”.

Mr. Tsukakoshi is the chairman of a kanten (or agar as we know it in English) manufacturing company named Ina Food Industry Co., located in the mountains near Nagano where the 1998 Winter Olympics were held.

I’d seen a New York Times article written about Mr. Tsukakoshi and was intrigued that his was a company that Toyota executives visit to learn from. Thank you also to Bob Emiliali, whose tweets about the “Tree Ring Management” book prompted me to buy it.

I recommend reading the book. Mr. Tsukakoshi is a witty guy and his approach he shares many nuggets of wisdom that we can all learn from.

I want to share a few of the highlights of the book “Tree Ring Management” that stood out for me.

Mr. Tsukakoshi’s principle philosophy is based on taking a long term view, but to continue to grow and strengthen each year. He describes his view that management should be like tree growth:

“Tree rings vary in width with each year’s weather, sometimes groing a great deal and sometimes only a litle, but the tree always grows bigger than it was the year before. Even if a given ring happens to be narrow, the important thing is that the tree continues to grow.”

Mr. Tsukakoshi writes that: “Profit is like excrement produced by a healthy body.” Profit is something that every organization needs to do, but it shouldn’t be the sole purpose for a company. He explains that:

“Nobody makes defection their goal in life, but any healthy body naturally produces excrement every day. Even without trying, it comes. This is the key. Any healthy company should produce the excrement of profit.”

He believes that when companies start to put profit as the goal for a company, it will lead them astray from making good decisions and towards bad management:

“Unless you are clear that profit is just a means of building a good company, it is easy to drift in the direction of improper management methods.”

This analogy of healthy company and body made me think about Dan Markowitz‘s description of leadership and Lean as building a “fit organization”. His book “Building the Fit Organization” is actually next on my shelf to read!

A company exists to make its employees happy

Mr. Tsukakoshi believes that taking care of his employees is paramount. He says that “profit itself has no value; value is generated in the way profit is used.” He suggests that companies should measure growth by employees’ happiness and thus should use its profits to invest in employee “happiness”:

“I believe that a company exists first and foremost to make its employees happy, and increasing sales and growing profits are nothing more than means of making employees happy.”

If you make your employees happy by making each year just a bit better, you will grow and retain employees. They will be willing to work hard for you, as well as sacrifice when needed for the good of the company. Rather than focus on “increasing productivity”, if you focus on increasing employees’ happiness, their intrinsic motivation to do good for the company will increase.

When employees start at the company, the first thing that they are shown at “orientation” is a “hundred year calendar”, which are also hung throughout the company. He tells everyone that “somewhere on here is the date of your death”. The purpose of the calendar is to give employees “a visceral sense that their own lives are limited” and that you have to take full advantage of every day to its fullest.

Mr. Tsukakoshi ensures that everyone in his company makes a good salary, that the environment is pleasant, and that he invests in the community in which his employees live. He even pays for vacations for the whole company to take.

Parallels to other Japanese companies 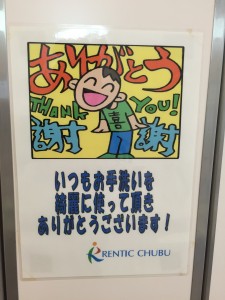 I found many parallels between Mr. Tsukakoshi’s approach and several other Japanese company I have visited this past year.

One company similarly expressed a deep commitment to its employees happiness by not allowing overtime or work on weekends, and by sending employees and their families on an overseas holiday every five years. This same company believes that the primary role for a manager is to support the motivation and innovation of his or her team.

Another company invests in its community by employing people with disabilities and helping them to achieve greater independence and self-sufficiency. In all of these companies, employee development and happiness is number one.

Mr. Tsukakoshi writes about how important it is to trust your suppliers and build long-term relationships.

Supplier relationships at the fish market

I saw this principle in action in Japan on a smaller scale recently. I got a tour of the Tsukiji Fish Market by Andy, the only non-Japanese approved purchaser at the market and owner of Andy’s Izakaya (if you are in Tokyo and looking for amazing, well priced sea food, don’t miss Andy’s!).

Andy explained that he doesn’t need to haggle with his vendors every day. Instead, he has cultivated a relationship over more than two decades built on trust and mutual respect.

The sellers know that Andy will only buy the highest quality products, but at a reasonable price.

So it is easy. He just goes stall to stall, checks out the product, chooses what he wants, and moves on to his next vendor.

Mr. Tsukakoshi made some interesting comments about Japanese culture versus Western cultures. As he was writing primarily for a Japanese audience, I find that his comments are particularly insightful into Japanese culture.

His example of the difference between trains in Japan and Europe was an interesting insight into Japanese culture from a Japanese business person.

At the Japanese train stations, there are multiple checks for your ticket: when you enter the station, when you go through different gates, once you are on the train, and again when you depart the station.

In contrast, tickets are infrequently checked in Europe, with the assumption that people generally buy the proper ticket for their journey.

I think this is interesting because overall, the Japanese are very honest, rule-abiding people. Just as Mr. Tsukakoshi points, out, I too can’t imagine anyone trying to jump on a train.

There are many other great ideas that Mr. Tsukakoshi puts forward in his book, but these are some of the ones that stood out to me the most. There are many more that I could have written about. I encourage you to read the book. He doesn’t call his management approach “Lean” per se, though many of the concepts are in line with Lean, including the use of 5S and key concepts of people development.

I’m looking into how I can visit Aso Food Industry next year and if they offer tours in English as well as Japanese. Stay tuned!

Have you read the book? If so, what stood out for your about his philosophy?

What do you think about the concepts I’ve shared here?

Share your thoughts, comments and questions in the comments area below.