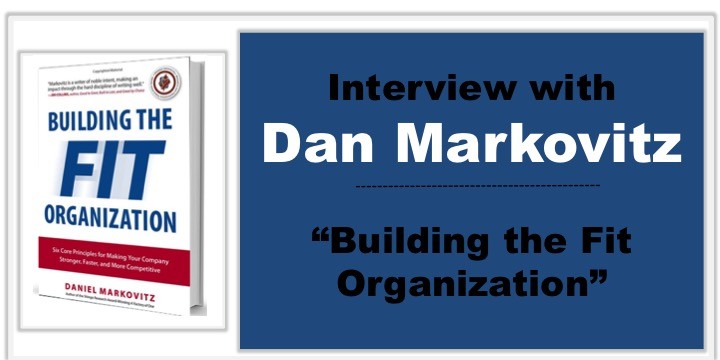 Is your organization fit or flabby?

Is your organization fit or flabby? That’s the provocative question that Dan Markovitz asks in his book Building the Fit Organization: Six Core Principles for Making Your Company Stronger, Faster, and More Competitive.

In the book Dan demystifies the language of “lean” by describing the key principles of a lean management system without using jargon or Japanese words. He shares tangible examples of how many organizations and leaders (including James Hereford, my former boss, who I’ve written about previously) are using these principles to develop organizational fitness.

Strive to be fit and strong, not skinny

I really resonate with Dan’s analogy to fitness.

When my father, a retired orthopedic surgeon and senior hospital administrator, recently asked me to explain (again, as parents tend to do) what the term “lean” means, I shared with him Dan’s concept of being “fit” and how I believe the principles of lean and the Toyota Production system are aligned with creating organizational fitness.

My dad said that the concept of fitness made so much more sense to him than that of being “lean”.

He suggested that perhaps “lean” is a term that perhaps made sense in the 80s and early 90s when popular culture coveted skinny, emaciated, lean models, but that “fit” is a better term for today’s age.

I couldn’t agree more! To me “fit” is a much better description of what the term “lean” was intended to describe – it’s about being strong, agile, robust, and disciplined in service to continuous self- and organizational improvement. 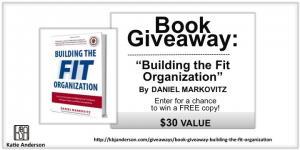 Congratulations to readers Hanah Polotsky, Stephanie Van Vreede and Heath Kelley for winning of copy of Dan’s book Building the Fit Organization. The giveaway is now closed, but I will run more in the future for other books. Sign up to be notified of new blog posts and opportunities on the side bar of this post.

I asked Dan recently to share some of his thinking about his book and how you can train yourself and your organization to become fit.

You can read his answers to my questions below!

1. What was keeping you up at night and led you to write this book?

The corporate landscape is littered with the carcasses of failed lean transformations. However, there’s no shortage of smart, committed people who are passionate about lean. That got me wondering why so few companies are successful in creating a strong, sustainable lean culture.

I wanted to explore whether there are other factors besides the usual ones (leadership not involved, too much emphasis on cost cutting, etc.) that were creating the problems.

There’s one other issue that led me to write the book: I despise the kowtowing to Toyota and the insistence on using Japanese words. 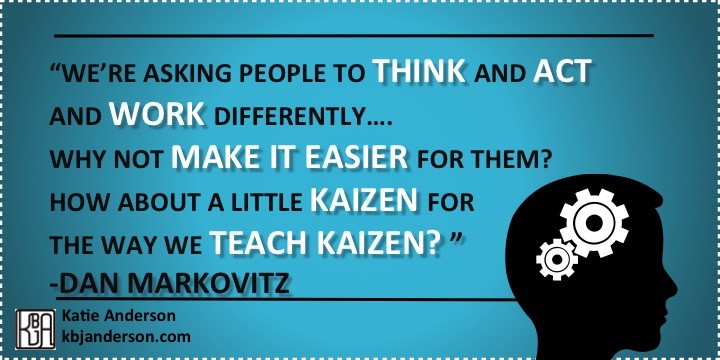 We’re asking people to think and act and work differently – that’s already a pretty big challenge. Why do we make it even harder by requiring them to learn another language? Why can’t we say “improvement” instead of “kaizen”? (By the way, have you noticed how many people mispronounce “kaizen”? Why not make it easier for them? How about a little kaizen for the way we teach kaizen?).

I wanted to give people a way to talk about lean using language and metaphors that resonate with them, without talking about cars, using Japanese, or forcing people to memorize five words beginning with “s,” no matter how awkward the locution. 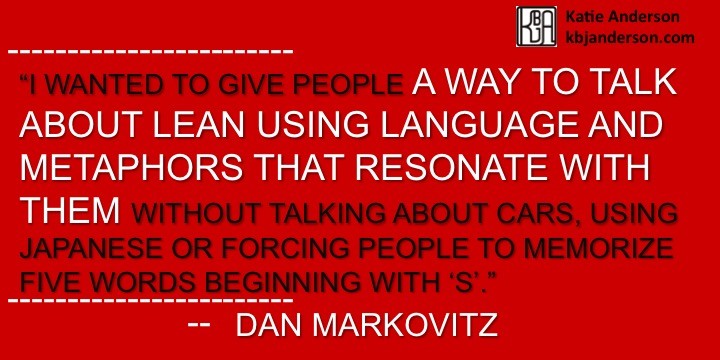 2. In your experience, why is “relentless, focused commitment to practice and improvement” (p. 12) so hard?

Entropy. It’s a fundamental principle of thermodynamics, and it operates with particular vehemence on an individual level. How many people almost never make it to the gym on a regular basis – even though they’ve paid for a membership? How many people have exercise equipment gathering dust in their houses? And the benefits of exercise are pretty compelling – not only are you healthier, but you look better and (in my case) it provides license to eat more.

Now, imagine trying to get not one person, but a group of people, to commit to doing something that’s time consuming, requires them to change long-developed habits, and doesn’t even deliver a compelling personal benefit (like looking better or allowing you to have a brownie at lunch).

People are busy, and they labor under high expectations. It’s far easier to take the well-trod path of least resistance rather than try to build a new road through the thicket of new work patterns.

3. How have your experiences as a runner and a running coach influenced your perspective about the role of coaching and “fitness” in a professional environment?

My background as a running coach is actually something of an impediment. Running isn’t terribly complex, and races only come about once a week, so it’s easier to just tell the kids what to do. (It’s tough to go through PDSA learning cycles quickly when you have to wait a week or two for the next race).

As a result, my default coaching mode is to tell people what to do, rather than guide them to figure it out for themselves. I fight that habit every time I work with a client.

However, my experience as a runner has been incredibly beneficial. When I started running in 8th grade, I stunk. Really stunk. I couldn’t run more than ¾ of a mile without stopping (which is not a competitive advantage in a 2.5 mile race). In 9th grade, I was dead last in every race. But I kept training, and by my senior year, I was undefeated in the 2-mile on the track, and I continued on to reasonable success in college and beyond. I was no All-American, but I did pretty well for a guy who started out as far in the back as I did.

That journey taught me the value of persistence, of small improvements, and of the folly of looking for what Dr. Deming called “instant pudding.”

I’m happy when I see a client making small – even tiny – improvements. They don’t need to be as good as Toyota today; they just need to keep moving forward. 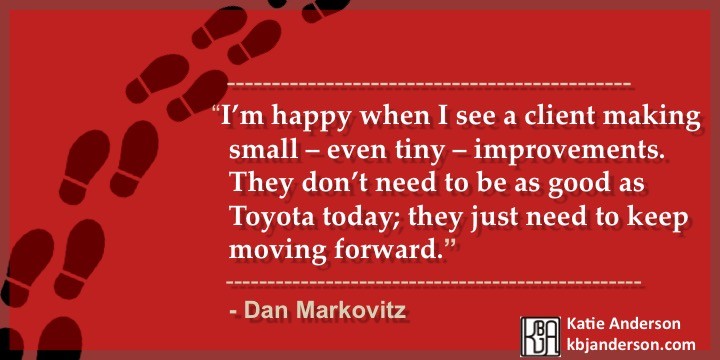 4. You lived in Japan for four years and speak Japanese fluently, but you have told me that you didn’t learn about TPS or Lean until many years after you returned to the U.S. How has your knowledge of Japan and Japanese culture influenced your understanding of the Toyota Production System / lean?

Mostly it causes me to cringe when I hear Japanese words mispronounced.

Seriously, there’s nothing inherently Japanese about lean or TPS. In fact, you have written several articles arguing that lean/TPS is actually a countermeasure for some typical Japanese characteristics – deference to authority and the reluctance to be stand out and be different, among them.

To be sure, there are some elements of Japanese culture that lend themselves to an obsessive attention to quality, but you can see the same obsessiveness in artisans in any culture.

5. As a coach, when you work with “flabby” organizations, what is the first step you recommend on the pathway to fitness?

If you want to run a marathon, you don’t start with a 20-miler. If you’re not in shape and have no experience in running, you start by running a mile. Or a half-mile. Or even walking briskly for 30 minutes. You start small and build. 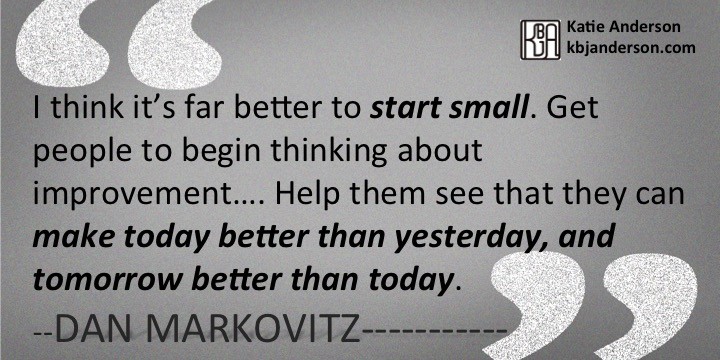 I think it’s far better to start small. Get people to begin thinking about improvement. Get them to realize that they have agency and autonomy in changing the way work is done. Help them see that they can make today better than yesterday, and tomorrow better than today.

Get their hearts and minds engaged with small, simple improvements, and then – once they’ve adopted that mindset – then you can work on SMED or other big projects.

6. What is something that you were surprised to learn through the research or writing of this book?

In every case where I saw a genuine lean culture being established, the companies were NOT talking about Toyota and they weren’t using Japanese. They made the concepts and language their own.

That’s not to say they’re as good as Toyota, but they’re on their way toward creating a true culture of continuous improvement.

7. What are you pondering now about organizational fitness and leadership?

I had hoped that leaders would see this book as an important way to accelerate their lean journey, but so far the message seems to be resonating more with the front line – both workers and continuous improvement teams.

I’m trying to figure out why leadership hasn’t embraced this different perspective.

8. What is a question that you haven’t been asked about “Building the fit organization” that you would like to answer? And what is your answer?

Q: What’s your favorite part of the book?

A: The dedication page. . . which the publisher accidentally left out of the print run. You’ll have to buy another copy when it goes into reprint, or email me to find out what it said.

What do you think of Dan’s comments? Share your thoughts in the comments section below.