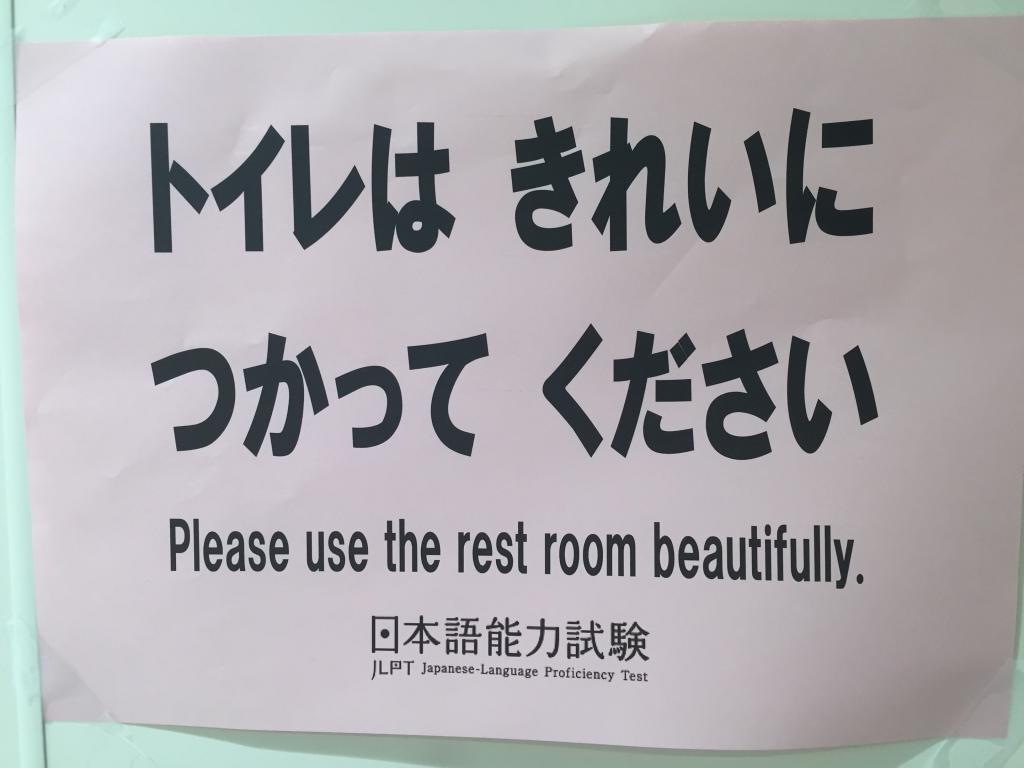 Life in Japan: Where clean is beautiful, but 5S is still hard

This past weekend I took the Japanese Language Proficiency Test (Level 5) and saw this sign posted in the bathroom that made me laugh. It was a good stress reliever in advance of the test and got me thinking about writing a blog post about the notion of cleanliness that is inherent in everyday life in Japan.

And yes, I can read the sign in Japanese (at least the hiragana portion).

The Japanese word “kirei” means both clean and beautiful.

I think this says a lot about that being clean equals being beautiful, and vice versa. I had a chuckle for a few reasons.

First, it is striking how “beautifully” and “cleanly” do not mean the same thing in English. The sign definitely had a different impact than intended – and also sounds strange in English in the context of bathroom use.

Second, I found it a bit ironic as I was heading into a 4 hour exam of Japanese proficiency that the Japanese language authorities chose the wrong English word when reverse translating their sign. They would have missed a point if this were on the English test!

It is amazing how CLEAN Tokyo is. For a city that contains almost 14 million people, it is striking how clean it is.

The pervasive cleanliness, a sense of safety (I’ll cover this in a future post) and the pockets of solitude and tradition, makes Tokyo feel like you live in a small town, not one of the largest cities in the world.

Contrasts to the U.S.

I really noticed how clean Tokyo is this summer when I was back in the United States and visited San Francisco.

San Francisco is a beautiful city, but I wouldn’t call it clean.

In walking through different parts of San Francisco, I frequently found piles of trash, areas that smelled of urine, and many places of disrepair. There are bigger societal issues at play here (and given the drought in California, regular watering of pavement would be an anathema), but it was striking contrast to Tokyo.

Coming back to Tokyo in September, I had a greater appreciation for how clean really is beautiful.

How do they do it? There are no trash cans!

However, it is also amazing that Tokyo is is as clean and litter-free given how few trash cans exist.

You quickly learn after a few days here that you will be carrying any trash you with home. Public areas sometimes have signs saying “please take your trash home”.

The cost for trash is very high here since landfill is limited with Japan being an island country.

And when you do find a trash can, it is a detailed process with many different categories for separation.

Despite all of this, there are not piles of trash on the street. Everyone carries it with them until they either get home or find a trash can many kilometers away!

Cleaning is a societal value

Japan is an island nation where the sense of community and desire to maintain orderliness is deeply engrained. This can explain some of my previous observations about Japan being a rule abiding society, and it also explains how keeping things “beautiful” is every citizen’s responsibility.

New Years is about cleaning

The New Year’s holiday is focused on cleaning, not partying! While we are out making a mess at midnight in Western countires, Japanese people head to their homes to spend 2-3 days cleaning their houses and preparing for the new year ahead. It’s like the whole country does “spring cleaning” at the same time, but in the winter.

Ingrained at an early age

As explained in this article from the Japan Times over a decade ago, Japanese children are responsible for actually cleaning  their classrooms and schools. Get out the rags!

The goal of cleaning in schools is not just to achieve the result of a clean classroom, but also to teach Japanese children broader life skills and the importance of everyone taking collective ownership and pride in maintaining their society.

There is a cute video that was filmed recently in my neighborhood that shows this concept of “o-soiji” in more detail.

Can you imagine how this would go over at an American school?! I wouldn’t mind my kids learning better life skills about cleaning though…

Continues into the workplace

Another blogger just wrote about this topic and shared how employees are expected to keep their desks neat and tidy – and that the “cleanliness police” come around to make sure his desk is clean at the end of the day.

At a manufacturing organization I visited that employs mentally disabled people, the first process new employees learn is how to clean the bathroom. The management sees this as the first step in being able to contribute to the workplace and follow rules.

And a Japanese CEO whose book I just blogged about believes that all staff should clean the bathroom and their entire work space.

I do an exercise class in one of the local parks in Tokyo a few times a week and every morning people of retirement age  don their volunteer vests and work to clean the park by sweeping the leaves and tidying the public areas. (I wouldn’t call them all “retirees” as it is unlikely that many of the women worked outside of the home – see my posts of gender dynamics in Japan for more of my observations about this).

There is also an exercise group of about 10 women 70-90 years old who gather in the park to do stretches to the Japanese language version of “Do-re-me” from “The Sound of Music”. 🙂

How does this relate to “Lean”?

One of the foundational concepts of the Toyota Production System is the concept of “5S” where everything has a place and everything is in its place (and is clean!). This creates stability and predictability in supplies and materials, and was the very first Lean concept that I learned and led at Stanford Children’s Hospital back in 2006.

The 5Ss are Japanese “S” words that are transliterated into 5 English words:

5S is an extension of cleanliness

Given how the concept of cleanliness and orderliness is a societal value taught from an early age, I can see how 5S might come more easily to Japanese people and is something people expect to do.

There is even a city outside of Tokyo that calls itself the “5S City” where this is a core value of everyone in the town. They even host a “5S world Summit” every two years. (Side note: I’m looking to organize a one-day trip to the 5S City with a Japanese colleague in the first half of 2016. If you are interested in joining or learning more, send me a message!)

But sustaining is hard without a process

However, while the principles of 5S are embraced by society, this does not mean that everywhere in Japan is “5Sed” and practiced in everyday aspects of life.

Some hospitals and manufacturing organizations that I have visited have the same challenges as we have in other countries with managing supplies and keeping ares neat and clutter-free.

My friend Mark Graban has also observed this in previous trips to Japanese hospitals and organizations.

My hypothesis is that this challenge is related to the last two “Ss” – standardize and sustain. It’s been my experience with organizations in the U.S. and I imagine it is the same here in Japan.

Entropy will win without focused counter-actions

In the absence of a process to maintain cleanliness, entropy will ensue. This is a universal truth and doesn’t matter if you are Japanese or American!