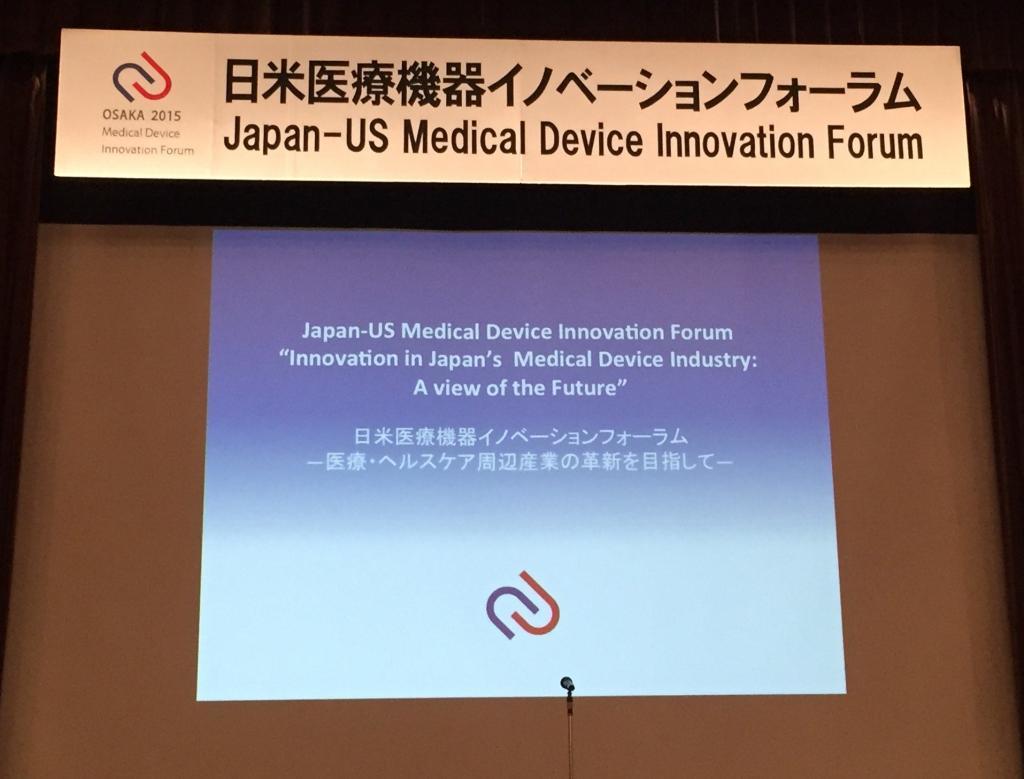 Two weeks ago I went down to Osaka for the day to attend the Japan-U.S. Medical Device Innovation Forum.

I was invited to travel with two retired Japanese businessmen (from a large international Japanese company), both of whom lived in the U.S. for a large portion of their professional careers, which always leads to interesting conversation.

While my professional focus for the past 10 years has primarily been on the delivery side of healthcare, I am interested in health and wellness generally, innovation, and synergies between the United States and Japan.

It was a day that I didn’t want to pass up.

Context of the event

As I highlighted in my previous post, two hot topics in Japan right now are how Japan can foster innovation and learn how to apply Lean (originating from Toyota Production System) as it has evolved in the U.S. – such as “lean start-up” thinking and product development.

The speakers were a balance of Japanese and U.S. businessmen (and yes, they were all men – but more about that in my next post), with the event simultaneously translated for both languages.

The format of the conference was primarily of panels (alternating between Japanese and U.S. perspectives) with some Q & A after.

While the specific focus of the conference was on medical device innovation, the speakers referenced start-up culture more generally and the environment of innovation in Japan today.

Buzzwords of the day

Three buzzwords stuck out to me over the course of the one-day event:

The word “ecosystem” was used throughout the conference by both Japanese and foreign presenters. Many speakers talked about suggestions for how Japan can create an ecosystem that supports innovation and entrepreneurship. The website for the event explains that:

The emphasis throughout will be on US-Japan collaboration between and among universities, large companies, small and medium sized companies, incubators and accelerators, start up companies, entrepreneurs, government, and medical institutions, i. e., the entire ecosystem.

However, none of the speakers defined or articulated what a complete “ecosystem” might be. I wonder if the Japanese audience members who were not familiar with start-ups could really take away what the critical elements of a desirable “entrepreneurship ecosystem” must be. My Japanese colleagues asked if “ecosystem” is a common term in American business.

Speakers suggested that the Japanese “ecosystem” should include the following elements:

Last week, an article came out in Forbes.com called “Japan’s Emerging Culture of Innovation: the Invisible Things Can be the Hardest to Change” that calls out many of the issues discussed at the conference related to cultural differences that impact (positively and negatively) Japan’s culture of innovation. This article gives a good overview of the context in which the conference speakers framed their discussion.

Some of the areas of opportunity that different speakers at the conference cited for Japan to grow a more robust medical device innovation “ecosystem” included:

Three comments also stood out to me in relation to Japan’s “typical Japanese business” culture and companies with a Lean management practice:

The formal “catchphrase” of the event was “Silicon Valley Style”. I’ve heard the use of the term “Silicon Valley style” in several venues and contexts in the past few months. The term embodies the culture (and “ecosystem”) that Silicon Valley (and some other areas) have been able to foster, particularly in regard “Lean start-up” philosophy of how to innovate and “fail fast”.

Another colleague named Rochelle Kopp, who I met on Twitter and met up with when I was in the Bay Area this summer, taught a seminar last week in Tokyo to Japanese executives about “Silicon Valley Style”. Last month she wrote a blog post about this very topic: “What Japanese Companies Can Learn from Silicon Valley About Speed and Nimbleness”. In this blog post, Rochelle sums up what I think many people have a misconception of lean being ubiquitous to Japanese management:

What most people don’t realize is that the techniques used by Silicon Valley firms – including scrum, kamban [sic] and The Lean Startup – have their roots in Japan. The difference is that Japanese firms don’t use these methods, or if they do it’s limited to manufacturing settings. What Silicon Valley firms have figured out is how to apply these productivity tools to the white collar knowledge work that is the key source of competitive advantage for most firms today – areas such as software development, product design, project management, and marketing.

The Stanford Biodesign program focuses on developing two key skills in their fellows:

I will be interested in following how the program helps develop greater biodesign innovation in Japan! I was excited to have been invited to speak to the fellows next year about my experiences developing Lean leaders in healthcare environments.