After running into the former Chairman of Toyota, Mr. Cho, moments earlier at the Nagoya train station, I arrived at the first stop of the day – the Toyota Commemorative Museum of Industry and Technology.

My tour guides for the museum visit were Mr. Isao Yoshino, a 40 year Toyota executive and one of John Shook’s first managers at Toyota, and Toshiko Narusawa, co-author of “Kaizen Express” with John Shook. Lucky me!

You can read the other parts of my first visit to Nagoya and this day trip to visit with Isao Yosino in the following posts: 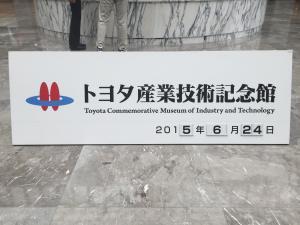 The Toyota Commemorative Museum of Industry and Technology is housed in what was the original Toyoda Automatic Loom Works factory and contains a working history of the Toyoda family’s innovation in weaving and its transition to making cars.

You can find more history and information about the Toyoda family and the museum on their website.

Technology and innovation of weaving

The first part of the museum, located in the original warehouse of the factory, is focused on the technology and innovation of weaving.

There were many live demonstrations of the the different loom technology, which made the museum come alive! The demonstrations were conducted in Japanese but my trusty companions were able to augment my fragmented language skills as needed.

Before the visit to this museum, I hadn’t fully appreciated the advancement in textile production that “simple” innovations had produced, and the impact that this had on both our ability to use textiles as well as creating the foundation for the Toyota Way.

The shuttlecock quality control of detecting and “stopping the line” (stopping the machine) when there was an error (a broken thread).

The invention of the shuttlecock was the beginning of the concept of Jidoka in the Toyota Production System.

You can read more about Jikoka and the Toyoda loom innovations on the Toyota website. 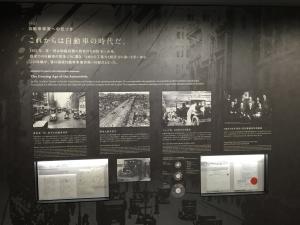 The second part of the museum focuses on the Toyoda family’s transition from textiles to automobiles.

In the early 1920s, Kiichiro Toyoda went to the U.S. and Europe to study spinning technologies and saw how popular automobiles were becoming.

This sparked his interest in autos and was the beginning point for Japan’s automotive industry.

It started with a bicycle

Did you know that one of the first motors that Kiichiro Toyoda experimented in building was attached to a bicycle?

This seems fitting for me as today motorized bicycles are ubiquitous in Japan as a means for transportation. I love riding around Tokyo with my kids on my “mamachari”!

In the early 1930s, Kiirchiro Toyoda took over a corner of the Toyoda Automatic Loom Works factory (the site of the museum) to start prototyping vehicles.

In 1936 the company decided to change its logo, which resulted in the change from the family name Toyoda to the new company name “Toyota”.

In 1937 The Toyota Motor Company Ltd was established as a separate entity.

It was impressive to read about the years of experimentation it took for Toyoda and his team of innovative engineers to develop the first Toyota vehicles.

The deeply engrained culture to persevere, to learn from failure and to keep trying was developed at the inception of Toyota’s automobile company.

The next part of the museum was focused on more current automobile production.

I learned from Yoshino that in the 1940s and early 1950s, Toyota was forced to focus on manufacturing trucks rather than commercial passenger cars.

As WWII approached, Toyota was was pressed to produce military trucks, while only being allowed to produce a few passenger cars.

It was only in 1955 that the firs completely domestic passenger car, the Toyopet Crown, was produced.

This section of the museum houses examples of different Toyota models through the decades, a functioning demonstration of the Toyota production line using the robots in the welding area (without actual welding), and information on the Toyota Production System.

We went quickly through this part of the museum as we had to get back to Nagoya Station to drop Ms. Narusawa off to catch a train back to Tokyo.

And Yoshino-san and I had to get to his university to have lunch with two of his students who wanted to practice English and meet a professional woman from the United States. I was more than happy to oblige.

I will be posting about some of our conversations about leadership and our visit to the Toyota Automobile Museum in upcoming posts.

As always, please leave any comments or questions below. If you have visited the museum, what was your experience? What questions do you have as I continue to explore Japan and learn about leadership practices at Toyota and other Japanese companies?