What was the thinking that led up to the development of the Toyota Way in 2001? I asked my friend Mr. Isao Yoshino, a 40-year Toyota leader, this question and he shared his thinking with me (and now you) about why “continuous improvement” and “respect for people” became codified as the two pillars of the “Toyota Way” 15 years ago. Read on to learn more!

You can also CLICK HERE to get a curated PDF of the top 10 Toyota leadership lessons that Mr. Yoshino has shared with me over the past two years. 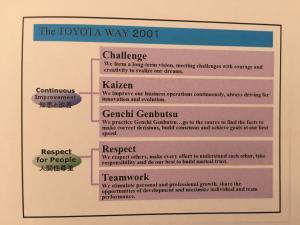 The Toyota Way guides the deployment of the Toyota Production System at Toyota Memorial Hospital.

In 2001, Toyota leadership published the now famous document “The Toyota Way 2001”, which codified Toyota’s key values and principles for a global audience based on two pillars: continuous improvement and respect for people.

In the image here you can see the breakdown of the Toyota Way 2001 principles, as described to me by leaders at Toyota Memorial Hospital in Toyota City, Japan.

But what thinking led to the Toyota Way? 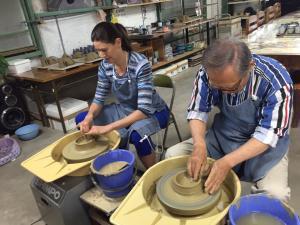 Making pottery with my friend and mentor Isao Yoshino in May, in May 2016 a few weeks before I left Japan. We did not intentionally coordinate in blue striped shirts!

What was the thinking behind WHY Toyota codified these specific principles into the Toyota Way 2001?

This question came up in conversation with a colleague recently, so I decided to go to the source and ask someone who was there on the inside at Toyota for over 40 years.

I emailed my friend and mentor Mr. Isao Yoshino, who was one of John Shook’s first managers at Toyota, to see what insights he could share with me. Mr. Yoshino has given me permission to share his thoughts with you.

The post below highlights quotes from my email exchange with Mr. Yoshino and some of my reflections on his thoughts.

The history leading to the Toyota Way 2001

You asked me how the two pillars of Toyota Way 2001 were developed.  Actually, to my surprise, I noticed that I have never asked that question to myself or somebody else before.
So I don’t know whether I can give you a right answer or not.  But I will jot down my own assumption on the reason why Mr. Cho decided to develop Toyota Way 2001.

Side comment: On one visits to Nagoya last year to visit Mr. Yoshino, I had an unexpected brief encounter with Mr. Fujio Cho, the former President and Chairman of Toyota, while departing the train station. This encounter prompted Mr. Yoshino to share with me a personal story about what an influential leader Mr. Cho had been for him personally.

Before getting to his hypothesis of the why Mr. Cho developed The Toyota Way 2001, Mr. Yoshino first described his personal experience of the historical context leading up to 2001.

In his email to me, Mr. Yoshino elaborated on the Kanri Noryoku Program (Kan-Pro, for short), that he wrote about recently with John Shook. The program, aimed at teaching managers A3 thinking and Hoshin Kanri, was implemented across Toyota in 1979 and 1980. Mr. Yoshino was one of a team of four on a task force in Nagoya City charged with creating and implementing the program across the company.

Mr. Yoshino explained that the Kan-Pro program of teaching A3 thinking more deeply to managers was implemented nearly 20 years after Toyota actually had “started learning Lean concepts from Dr. Deming in early ’60s.

This comment by Mr. Yoshino stands out to me as a reinforcement of what I recently wrote for an article in Planet Lean that lean isn’t inherently Japanese and that “Lean is – and always has been – a combination of the best management thinking from different cultures.”

Countermeasures to backsliding of quality improvement

However, just like everywhere, entropy rules and without intentional focus and old habits and preferences creep back.

Mr. Yoshino went on to explain that:

Mr. Nemoto, Senior Managing Director at that time [late 1970s], noticed that the excitement of QC activities in early ’60s has started slipping off the mind of many employees, particularly leaders at non-manufacturing divisions.
For this reason, Mr. Nemoto thought it would be necessary to re-tighten screws with the leaders of those divisions.

Kan-Pro was developed as a countermeasure (my words) for this backsliding to “non-lean” thinking and practices at Toyota at that time.

Toyota’s Hoshin Kanri (and Kanri Noryoku Program) … is one of the major reasons why Toyota continues to pursue its goal consistently with all the employees involved.

In the 1980s, Toyota (and other Japanese car manufacturers) expanded into the global market.

Mr. Yoshino himself, along with John Shook and many others, was directly involved in translating and teaching the Toyota Production System to an American audience at the NUMMI plant.

In the 1990s, the Western world got interested in how Toyota was dominating the global car market. In this decade, an explosion of research and books were published, beginning with the seminal book “The Machine that Changed the World” in 1990, in which the term “Lean” was first used to describe Toyota’s system.

However, as many people recognize now, researchers at this time emphasized the more visible and technical side of Toyota’s management system, without seeing or describing as much of the social side.

Mr. Yoshino explained his own observations about how outsiders saw “Lean” and how it relates to why Mr. Cho developed the Toyota Way in 2001:

TPS prevails around the world with a different naming of Lean.  Many people have some knowledge on the key elements of TPS/Lean.  There are so many books about Lean and the word of kaizen is commonly used as an English word in the manufacturing community.

I would guess Mr. Cho was still concerned that just understanding key elements of TPS such as “standardized work”, “takt time”, “kanban system”, etc. was not enough to manufacture good quality car.  All these key words are important tools to make TPS/Lean take root in the production site.  However, such key elements as “leaders’ role”, “show your respect”, “No problem is problem”, “make people before making cars” are not necessarily treated as equally as “kaizen” and other practical tools to make good cars.

Mr. Yoshino went on to explain that:

I thought Mr. Cho must have thought that such elements as “show your respect” are conceptional and non-visual, while “kaizen” and other words are quite practical and they are visual.  People tend to focus on visual key words more.

Practical tools (such as kaizen) and conceptual elements (such as respect) are two wheels of a cart.  If one wheel is missing, a cart cannot move forward. 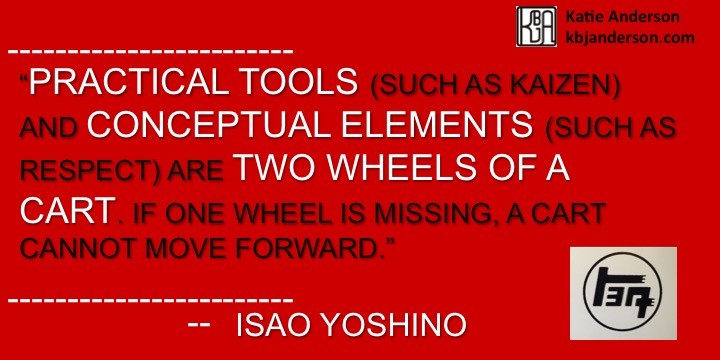 I would guess Mr. Cho has had the similar thought (or concern) as Mr. Nemoto around 2000 when Toyota was expanding its business boundaries across the globe. …

Mr. Cho must have thought that it would be essential for auto-workers in foreign countries deeply understand the key concept of Toyota’s business principle including TPS or Lean.

In essence, Mr. Cho’s reason for codifying the Toyota Way in 2001 was to emphasize the less-visible, but equally important, part of Toyota – respect for people.

To highlight the Mr. Yoshino shared a personal story of how he came to deeply learn and understand how important the concept of respect was at Toyota and how even the most senior leader embodied the principle “respect for people”.

When I was in charge of Hoshin Kanri project in 1979, I was told to draft a new-year speech for our president, Mr. Eiji Toyoda.  At that time, it was our division’s job to prepare key speech drafts for our president several times a year.  I was so thrilled at my boss’s order to write a new-year’s speech draft for the top guy of Toyota.

First thing I had to do is to review the year’s business conditions and figure out the next year’s outcome and develop a draft.  The second thing we had to do is to meet with our president in his office and show our first draft and also ask his opinion on our draft.

My boss and I visited our president’s office and show our draft.  He glanced over my draft and said, “OK.  Roughly it may be something like this.”

Then Mr. Toyoda said, “I just want to add a short comment on ‘safety on the job site’.”

My boss and I were puzzled at his comment because the new-year speech of our president is just like the State of the Union Speech at US congress.  We thought that adding “safety at the work site” would be too low in level for a new-year speech by the president.  So, my boss hesitantly said to him, “Excuse me sir, I am afraid that adding “safety on the job site” might make your speech sound less refined.”

President said, “Guys, my new-year’s speech does not have to be high-toned.  I want to emphasize to all the employees that ‘safety is the first priority at the job site’.”

At that moment, my boss and I came to know that the highest-ranking guy at Toyota is always thinking about his employees’ safety.

Mr. Toyota did not say a word of “respect” at the meeting, but what he meant was definitely “respect”.

Respect for people is what makes Toyota Toyota

Mr. Yoshino closed his explanation of why he thought the Toyota Way was developed with the pillars of “respect for people” and “continuous improvement” with the following statement:

I believe the concept of “respect” has been passed from one generation to the next at Toyota.  From the top-ranking leaders like Mr. Toyoda and Mr. Cho to a small-time manager like me, every leader at Toyota put a high priority on “respect” to the people around us.

If I am asked what made Toyota one of the top-ranking auto makers in the world, I would say, “We make people while we make cars.  It’s our people who make cars, not machines.  That’s ‘respect'”.

I am incredibly appreciative to Mr. Yoshino for sharing his thoughts with me – and for allowing me to share them with you here. Embodying another core Toyota leadership behavior that he has emphasized in conversations with me – humility – Mr. Yoshino signed off his message by saying:

I am not sure whether I answered your question or not.  I hope the above comment might be a small help to answer your question.

What do you think about Mr. Yoshino’s explanation that the Toyota Way 2001 was written as a way to emphasize the importance of “respect for people” as an equal pillar (the other wheel to the cart) of Toyota’s system?

Please share your thoughts in the comments section below.

If you want to learn more wisdom about Lean and leadership practices at Toyota from Isao Yoshino, I’ve written extensively about my conversations with him in Japan over the past two years.

You can CLICK HERE to get a curated PDF of the top 10 Toyota leadership lessons that Mr. Yoshino has shared with me over the past two years.

And click on the following links to read in detail about some of my conversations and experiences with Mr. Yoshino:

I hope you enjoy these articles and words of wisdom from Yoshino-san! 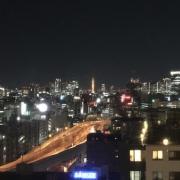 A reminder from a recent visit to Japan: Lean is not inherently Japanese 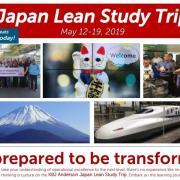 Learning a new culture: listen to the words of children