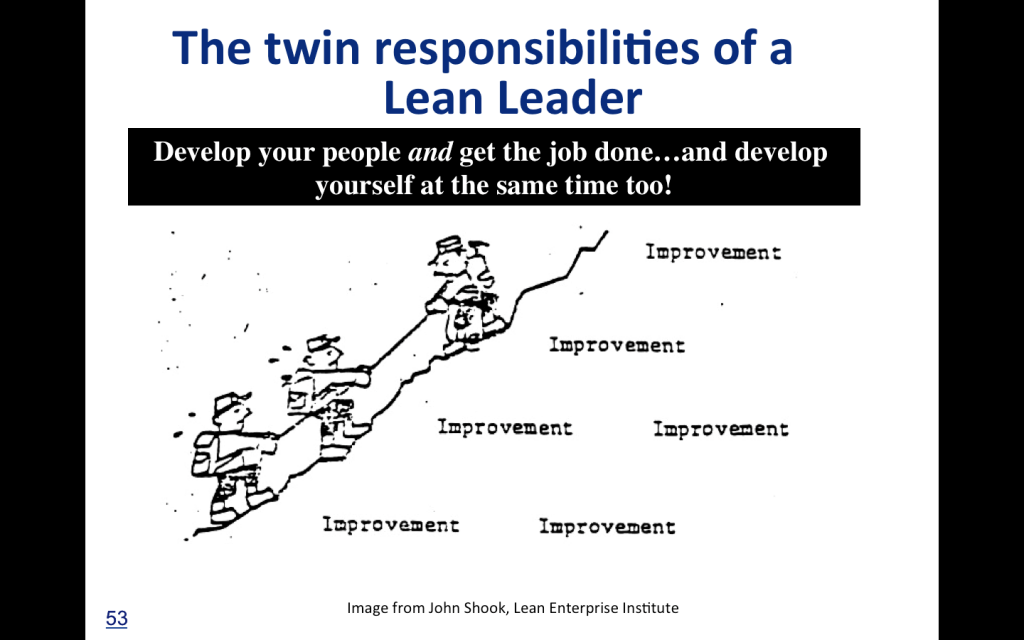 In the previous four posts in this series about my visit to Toyota Memorial Hosptial (TMH) in Toyota City, Japan, last month, I’ve covered topics from the overview of the hospital, how hospital leaders are deepening the practice of the Toyota Production System (TPS), what I learned from our facility tour, and how patients and staff are engaged in kaizen and strategy deployment.

But what about the role of leaders in supporting all of these elements?

I asked several times throughout our visit about manager’s and leaders’ roles in the organization, from supporting kaizen, deploying hoshin kanri, or being on in “gemba” (the place where the work is done) to manage and understand area’s processes.

In addition to encouraging and supporting kaizen, my Toyota Memorial hosts described other important roles that managers have. Throughout the day, they mentioned that a manager must:

I asked about HOW managers did this, but this was difficult for my hosts to explain.

I am hoping that I can learn more about how managers lead their teams and daily improvement to achieve organizational goals.

I have presented and written about how managers in U.S. hospitals practice TPS/Lean to support continuous improvement, and I’m intersted in leaning more about how Toyota’s hospital leaders are practicing these concepts.

I’m meeting with Mr. Sumiya again tomorrow in Nagoya and hope to delve into this topic in more detail again.

Staff feedback to managers as input into continuous personal improvement

During our site visit, Mr. Sumiya shared that a “morale survey” (staff satisfaction) started about a year ago as is an opportunity for staff to give feedback to their managers with the intention that this will help them continuously improve their leadership style.

He said that the results of the survey was eye opening – and “particularly shocking” for many of the physician leaders who had never received feedback on their leadership approaches.

Mr. Kamada and Mr. Sumiya have asked me to share ideas of how they can improve and for any examples of how TPS/Lean is applied in U.S. hospitals. As I write this post, think I will suggest to Mr. Sumiya tomorrow that he consider having the physician and operational leaders work through a personal development A3 plan as a way to build on the morale survey feedback.

Applying a structured problem solving process to personal improvement has been a powerful coaching tool I’ve found in working with leaders at all levels (and one that you can learn more about at the upcoming Lean Coaching Summit in Minneapolis in July!)

Upward feedback is not common in Japan

This new survey at Toyota Memorial is a possible countermeasure to this cultural preference to not give feedback.

I’ve learned from living in Japan for nearly 18 months that giving upward feedback is not something most Japanese are typically comfortable with.

In traditional Japanese culture, it would be seen as disrespectful to say anything that might seem critical to one’s superior. Oftentimes, a Japanese person would say “yes” or stay silent rather than telling a boss “no” or giving “constructive feedback”. Many Westerners that I know in Tokyo have found this challenging as they are used to working in Western cultural environments were upward and downward feedback is expected and encouraged.

I asked about physician involvement in continuous improvement and hoshin kanri, as this has been brought up as a challenge by the senior leaders at other hospitals in Japan (such as St. Luke’s and Nerima General, both in Tokyo).

Similar to many hospitals that I’ve worked in or with in the United States, physicians in Japan are not employed by the hospital.

At Toyota Memorial, the physicians are employed by the local university. Mr. Kamada shared that this can make it challenging for both physicians and hospital management as it impacts physicians’ loyalty to the hospital.

Physician engagement in kaizen is increasing

One of our Toyota Memorial hosts also explained that every two years the Japanese government changes the reimbursement levels and requirements for physicians. As their reimbursement changes, they are finding that doctors are becoming more interested in kaizen and business operations as former practices are not paid in the same manner.

They said that doctors “have to keep improving how to catch up to stay relevant in the market”.

Every two months, each physician chief must down comments to share with everyone in the hospital. This is posted on the intranet and holds the chiefs accountable to engaging in improvement.

A manager’s role: get the job done and develop people

Later in the day, one of our TMH hosts explained a leader’s job another way.

He said that leaders in the organization must understand two things:

The hospital leaders, both operational managers and physician leaders, must continue to understand the changing needs of the population and match the organization to these changing needs – in regard to both human resources’ ability and equipment.

Leaders must keep improving and think:

“We can’t just keep doing it the traditional way.”

The twin responsibilities of a Lean Leader

Ultimately, the way these Toyota Memorial leaders describe a manager’s role is the same as an early slide from Toyota that I use when teaching anything about TPS or Lean leadership (curtsey of John Shook)

And, as I share when I teach “Coaching for Improvement”, I like to also add a third goal – of developing yourself as a leader too – all at the same time!

Hoshin kanri, kaizen, & TPS at TMH – what questions do you have?

I am going to Nagoya tomorrow (in about 10 hours) to visit Mr. Yoshino for the day. In the afternoon, we will be meeting again with Mr. Sumiya, one of our hosts from Toyota Memorial, to discuss the process of hoshin kanri and kaizen in more detail.

If you have any specific questions for him based on this post or any of my others about Toyota Memorial, please leave them in the comments section. I’ll do my best to follow-up as time (and conversation) permits.

You can read the previous posts in this series about Toyota Memorial here: